A Review of Sexy Vampires, Beautiful Demons by A.J. Hamilton

Now I don’t particularly like vampire themed novels or collections. Thankfully I found one that is mostly not about them, and has at least one Succubus story in it… That’s a start at least isn’t it? 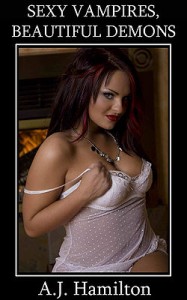 It is a set of three stories of:

If you lust after sexy female vampires and demons, these stories are for you. These creatures of the night hunger for men. They use passion and lust to drain their willing victims.

I’m not going to talk about the third story in this work. Mostly because I didn’t honestly read it as it was about vampires and that sort of theme does nothing for me. However the first and second stories are both, in a way, about succubi and while they aren’t exactly what I expected them to be, they were interesting in their own ways…

The Summoning is about two guys that find, in a library of all places, a book that tells of how to summon a sex spirit. They of course do that and in doing so the girl they want becomes possessed and they find that summoning a sex spirit can make for a hot time.

Succubus tells the tale of Chris who is being visited by a Succubus each night and a sleep researcher named Kelly who is watching him in a sleep laboratory. He falls asleep, the succubus, who is named Kucinda appears and works her magic on the two of them.

I liked how the succubus appears in the story, the way she draws Kelly into her sphere of influence and what happens from there. I was a bit disappointed in the abrupt ending, which I won’t spoil, that leaves much unanswered and a lot of doors open to further stories that we’ll probably never see…

I’ll give The Summoning two pitchforks out of five. Too much sex, not enough story.

Succubus gets three pitchforks out of five. A good deal of sex, some plot and character development, but lots left unsaid or unanswered and that’s a shame really…