A Review of The Zero Dog War by Keith Melton

There are some stories about Succubi that are, unfortunately, quite short. As a result they appear in anthologies and collections that don’t really lend themselves to being seen. It’s rather satisfying when an author publishes their works on their own so that they can be seen by those that look for stories about Succubi… Like me. 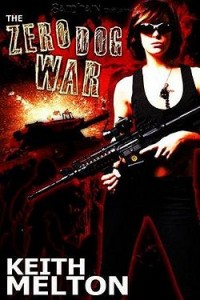 After accidentally blowing up both a client facility and a cushy city contract in the same day, pyromancer and mercenary captain Andrea Walker is scrambling to save her Zero Dogs. A team including (but not limited to) a sexually repressed succubus, a werewolf with a thing for health food, a sarcastic tank driver/aspiring romance novelist, a three-hundred-pound calico cat, and a massive demon who really loves to blow stuff up.

With the bankruptcy vultures circling, Homeland Security throws her a high-paying, short-term contract even the Zero Dogs can’t screw up: destroy a capitalist necromancer bent on dominating the gelatin industry with an all-zombie workforce. The catch? She has to take on Special Forces Captain Jake Sanders, a man who threatens both the existence of the team and Andrea’s deliberate avoidance of romantic entanglements.

As Andrea strains to hold her dysfunctional team together long enough to derail the corporate zombie apocalypse, the prospect of getting her heart run over by a tank tread is the least of her worries. The government never does anything without an ulterior motive. Jake could be the key to success…or just another bad day at the office for the Zeroes.

This work has it’s moments of silliness and fun mixed with occasional seriousness and, just once, disaster. That’s not bad things and it kept my interest through all that the characters went through, but this review isn’t so much about the book as the Succubus that appears in it.

Her name is Tiffany, she is a Succubus, but oh my is she a shy, lost thing indeed…

Tiff as she is mostly known as, looks like a Succubus. She has wings, odd looking eyes and is the focus of attention for men and, unfortunately, hated by most women save for Andrea who tries very hard to get Tiff out of her shell, but in the end that’s not the point of the story and so we lose Tiff in the woodwork for the most part.

It bothers me that the author clearly states in the story that Succubi are, in a way, related to vampires, something that always bothers me. She has pale skin and dark hair, which has echos of vampires, but her eyes and her wings set her apart from vampires, which is a good thing really.

As much as the author has a lot for their characters to do in the story, I found that Tiff really did not appear as much as I would have liked her to. I think that was partly to her role in the group, mainly watching from afar and above, which just seemed to lessen her effect I thought.

Still, the story was interesting, if a bit more violent than I would have liked to see. There was no sex in the story, which was a good thing considering the number of zombies that appear in it. So it became something of an action adventure with a supernatural angle to it.

Not a bad beginning to what appears to be a series based on these characters really, though I do wonder where the story goes after the way it ended.

Not enough Tiff, too much zombie for me…