One of the things that I haven’t seen a lot of in stories of late, is a Succubus that knows what she is, isn’t afraid of it, and has the personality and willpower to make of that something. It’s a refreshing change when a writer creates a character like that and it’s not simply a slight-of-hand trick… 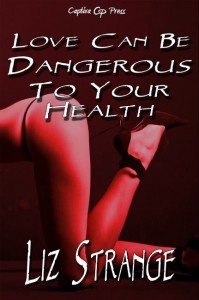 Love Can Be Dangerous To Your Health by Liz Strange

The work tells the tale of:

Sometimes love can suck the life out of you…literally.

Jake can’t believe the beautiful woman he takes home is in his bed. He finds it even harder to believe when she’s implicated in several strange murders. And it stretches the boundaries of his mind when she not only claims she wants a relationship with him…but also reveals a secret about herself.

Now Jake needs to balance being a homicide detective with what his heart wants. But can he really give this beautiful woman everything she asks for?

Jake has what appears to be a one-night stand with a stunningly beautiful redhead woman after he has been through a divorce and a really bad time. In the morning he finds that he can’t stop thinking about her and that something was odd about what happened between them.

We learn that Jake is a detective and is investigating a series of murders that seem to be linked together somehow. As he works towards solving that mystery, he finds that woman appearing near the crime scenes for reasons that he can’t work out.

That is until late one night she appears again in his apartment, tells him that her name is Cimidra. and that she is a Succubus…

And his world changes from that point on…

I liked Jake quite a lot. As Cimidra tells him, he is a good man with a good soul that I think makes him attractive to a Succubus not just sexually, but in that he can see, or understand, what Cimidra is.

Cimidra, being a red head, being quite strong willed and direct in her worldview and actions reminds me a lot of someone. My heart and my family will know who that is just from the red hair I am sure. She is interesting in that we don’t actually see her changing forms to seduce her victims, but we do see her more nightmarish form at one point, which is a bit disturbing. But that is needed for a plot point in the story, so I can overlook that for the person she is in the story.

I enjoyed this work because the sexual aspects of Succubi were not the real focus of it. Yes there are moment in it that sex is a part and the moments between Jake and Cimidra are really well done, but that’s not what drives it.

The relationship and personalities, more than Jake’s and Cimidra’s, make the story interesting and I read through the entire work without stopping which is something that I rarely find myself doing with a lot of the works about Succubi that I have found…

I hope that the author will continue the story of Cimidra, has they have built a world and characters that could well be a series easily.. That half pitchfork is because there was more that I wanted to see about Cimidra her history and more, but wasn’t revealed…

Still, I can hope for more can’t I?