A review of Belong by George Wilhite

Some stories have a different take on what Succubi are. Now, for the most part those stories have them being evil of course for that is what they are generally seen as.

I found a story that has the Succubus in it as a very evil being, but in the end of the story, a resolution comes that, while a bit unsatisfying to me personally, does prove that nothing in life is hopeless… 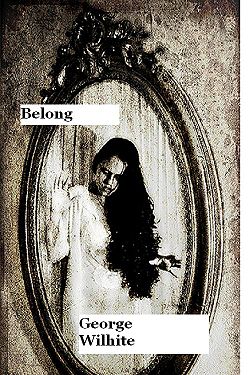 Loner Ian finds respite from the Hell known as high school in a decrepit rarely used bathroom in the basement floor of one of the buidlings. He makes a fateful encounter there with a beautiful female entity who draws him into her world of deceit and bloody vengeance.

Ian is alone in the world. For a high school student this isn’t really something odd, but what is odd is where he spends his time.

In a bathroom he comes to be in contact with what he calls a spirit there. He eventually discovers that the spirit’s name is Destiny, she arouses him and begins to enter this thoughts and world, drawing him into hers…

But she isn’t what he thinks she is at first. And by the end of the story we discover that she isn’t quite the Succubus that we expect her to be, or for that matter what she is made of.

I thought it was interesting that the author used the old beliefs of the power of names to be the driving force to much of what Destiny desires and what Ian wants to be part of.

But here’s the thing…

It’s such an emotionally sad tale that I found myself struggling to make it through the entire story. The pain in Ian’s life and more so the pain that Destiny creates and feeds on makes this work possibly one of the saddest things I have ever read.

She is evil. More so than I would have expected in such a short story and I credit that to the author who pulls no punches in how she acts and what she does to the other characters in the story. Some of that is in flashbacks and some of it happens in the “here and now”, but all of it is, quite simply, emotionally draining.

Destiny is not what I would call a typical Succubus in a lot of ways. She is bound by rules and events that are not part of the traditional Succubus myth, but the rules that bind her make the story possible. That is to say that I don’t think the same impact of this work would have happened if she had been portrayed in a traditional manner.

That’s not to say I like her. I don’t. She’s more monster than anything else, but that is her purpose here and the author takes full advantage of her.

I’m giving this work three pitchforks out of five.

I’m giving it this for the sadness that is so overwhelming in this story. I personally don’t like stories where there is no hope, or little of it. I do thank the author for tying up the tale in such a way that there is some good that comes out of it all by the time the last word is read…