A Halloween Tale by JHB

A review of My Sweet Succubus by Victoria Foxxe…

The question that comes then is, is that path as good or better than what you thought should happen? 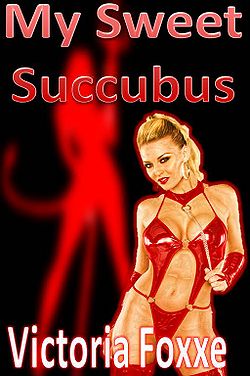 My Sweet Succubus by Victoria Foxxe

The story is told as being:

It’s a tough life for Jimmy Raines, a naive college student. None of the girls on campus notice him, and he has the most boring college major ever. Even worse Sheila, the sexy-student librarian, leaves him with a case of constant blue-balls.

But life has a way of twisting in unexpected ways. While studying an ancient manuscript, he discovers how to invoke the hottest demon of all: The Succubus. When his hormones ignore his common sense, Jimmy performs the ritual.

Will his sweet succubus be the girl of his wet-dreams? Or the stuff of his worst nightmares?

We meet Jimmy at the library as he goes in search of a manuscript and in doing so he introduces us to his personal fantasy, a librarian named Sheila. Through her he gets access to an old book that contains the spell to summon a Succubus…

And eventually he does so.

Through the short story, and it is quite short, we learn a little about Jimmy and the Succubus, before he makes a choice and the story ends.

I expected from the outline of the story and the things that Sheila says to him at the beginning of the tale that she would be a central character in some way, but really she’s only seen for a moment and then we don’t see her again. That bothered me because the way she acted around him and the things she said, I expected her to more than what she was.

And that was disappointing. I thought it would make for a nice twist in the story, but no, that wasn’t where it went.

As the story is a short flash of erotica, there isn’t a lot of character development nor is there really much of a plot to follow. It could have been double the length easily, and that would have helped to make the work better by explaining some facts that are revealed about Jimmy. It also might have allowed Sheila to make more of a mark in the story.

I think it would have really been an interesting aspect of the story to read and it was only touched in ever so slightly.

The story was rushed, but it is a flash so you expect that. The dialogue seemed off somehow and it could have used a bit more polish before it appeared out in the world to be read I think…

Needed to be longer, more story, and proofed by an editor just a little bit…

One final note about this work, it was revised and reissued about a month after I wrote this review originally. The author did tighten up a lot of the dialogue and gave the story a good editing pass which helped the overall story a great deal. I still think that there is room for expansion of this universe, especially when it comes to Sheila  and her relationship with Jimmy. I’d also like to see what the succubus would have to say about it and more so, what Jimmy will do as a result of what happens to him in the story…

I know that’s all vague, but I don’t want to spoil the story as other than the little nits in it, I think that as a series it might be an excellent beginning…