Succubi Image of the Week 199

A Review of Covenant of the Faceless Knights: Beginnings by Gary F. Vanucci

I think it is important that when an author starts any sort of work, and this includes myself, there are three things that matter. One is character. It doesn’t matter how good the rest of the story is if your characters, especially the main ones, are not interesting. The second  is their motivation. It is not necessary to give the reader everything at once. They will wait for the truths to be revealed if the story is worth it. Lastly, at least to me, there needs to be something to battle against, or at least to overcome that makes the characters grow over time and the motivation in each of them come to make sense.

That’s not always an easy thing to do, especially when there are not a handful, but many, many characters that are needed to make the story ring true. It is a talent that I have not seen many writers manage that can have all sorts of characters with their goals clashing together and keep the reader interested in finding out what happens to each and every one of them.

I think this author managed that exceptionally well… 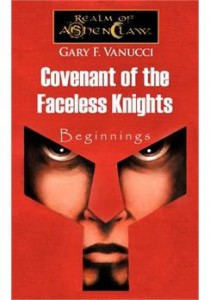 Covenant of the Faceless Knights: Beginnings by Gary F. Vanucci

Covenant of the Faceless Knights is a classic tale of good vs. evil set in a fantasy realm where a naive elf finds himself at a crossroads and faces returning to the life he once knew or accepting a life of unknown dangers. This story follows the lives and interactions of four very unique people at different stages of life and with very different motivations, that come together to stop an ancient artifact from falling into the hands of an ever-growing, malevolent force.

The story tells of how these four individuals interact, grow and overcome not only their enemies, but conflicting personalities as well in order to come together as an effective unit under dire circumstances. Each of them brings a desired skill set along with a handful of baggage from their past that they must overcome in order to accomplish their goal and ensure the safety of the Realm of Ashenclaw.

From the first page, it is obvious that the story is set in a rich universe of characters and settings. Moving from place to place in the book isn’t a simple info dump but instead is a well considered and thought out picture that the author draws in your mind. The same is true of the characters in the book. None of them are anything like a cardboard cutout which is a pleasant surprise. The same is true of the minor characters as well, they are not simply cannon fodder and have a purpose in the core of the story which makes their appearances important to note. I won’t spoil which ones are, but I will say that the ones that make their way through the entire story are, at the end of it, almost main characters in a way and their return in the next story I do look forward to.

While the lead up to the first meeting of the main characters of the story takes a little while, I didn’t see a fault in doing so. The time was well spent in giving the reader a look into this world, some of the dangers and pleasures that exist in it and it established the world really well. But again, this wasn’t an info dump. The story was told in a way that made it fit into what was happening to the characters and that gave the story life. I found that from the beginning I cared about what was happening to them all and I wanted to see what would happen next.

The mystery of this world is interesting as well. There are a lot of questions that occur as you make your way through the story, nut not all of them are answered. That’s a good thing as an air of mystery I think lends itself well to the overall theme.

There is an underlying tension in the book that appears not just in the characters, but in the world itself. It’s almost as if everyone is waiting for something to happen that will make the past history of this world a minor event in comparison… and that past history is violent and almost brought this world to its end.

The story is a quest of course. A quest to find something stolen from the side of the light which  was keeping it safe from the forces of darkness. The interesting thing is that the heroes of the work don’t actually come in contact with the one who is constructing the threat, never discover who they are, and only know of the one quest they are undertaking. But as that quest unfolds, we see the threat building in parallel with the adventurers as they attempt to fulfill their goals and overcome very high odds of success. But then this is the first story of course and so there is world building to do and events to place into motion… all of which I am sure will be encountered as the overall story arc moves to the next part of the story when the next book in the series arrives.

It’s difficult to talk about the main characters of the story without revealing a lot of spoilers. I won’t do that but I will point out that each of them has a deep background story that explains why they have the drives they have, and also helps to being them together as a group. Each has a strength and a weakness that can make their lives difficult at times and when they must battle the forces placed against them, there is strife and argument among them. That makes them not perfect, not overpowered either. They must come to act together or they will perish alone. Setting up the connections here was well done and there wasn’t anything that I read that bothered me in their actions or the results of those actions.

There are, of course, succubi in this work, but they are not what I would call the traditional kind. The author has taken the idea of them and altered it slightly from being creatures that are purely demonic into a society with its own rules and explanations. The succubi live underground in a city they call Ulthon and the succubi are the descendants of Lilith. Beneath her, the children that she birthed with the help of other Demon Lords are known as Aspects and have demonic forms, that being wings, horns and other such tale tell signs. The children of the Aspects are cambions, half-demon beings that have some of the appearance of a demonic form, but not as severe as the Aspects, who are the pure demonic branch of the succubi in this world.

They do not consume souls, but instead they take life energy from their victims, which makes them age rapidly until they wither and die. They do so through contact with their victims, though they prefer kissing them until they fade away.

The cambions appear normally as beautiful albino women with long hair and amber eyes who, at least in the cases that we are shown, are vain about their looks and use their powers of suggestion in their voices and the pheromones that they produce, to alter and control the thoughts of others around them by making their victim’s reality alter to what the succubus wants it to be.

They have a demonic form that appears momentarily when they are feeding which have horns, pointed ears, sharp claws on their fingers and bat wings that sprout from their back. They also have a tail and their canines sharpen to sharp points that are similar to a vampire.

But what I think is slightly odd is that they are also warriors. Normally succubi in most stories do not fight, they seduce and control their targets. In this universe, they carry weaponry, a long sword and a scourge. It seems odd to me that they would use a scourge as it doesn’t seem like something that makes sense for them to use. Mind you, I prefer pitchforks myself and the occasional sword… I do wonder if the succubi here just have those weapons for their last defence and little more as there isn’t much in the way of fighting scenes for the succubi in this story.

It’s interesting to note that the succubi call their slaves “thralls” as well. They are beings of no will that obey commands given them with no thought even to the point of their certain death. More so that any thrall can be controlled by any succubus’ voice. This interests me as I can see this being a weapon that one succubus might use against another. They all seem to be in a competition with each other for a place of power and I wonder if that will come to haunt them later.

The main succubus character, Phaera, is the first daughter of the succubus queen in the book, Nahemia. She is very much a being that wants power and is willing to do whatever she needs to in order to be with that power… and she finds one. But that power, the force of evil in this world, isn’t affected by her powers and the question becomes as the story goes on, is it the lust for power that makes her act in the way she does, or is it something else?

I would have liked to have seen more of the succubi, but of course they are supporting characters in this work and that wasn’t likely to make them core characters. However Phaera makes her presence known throughout most of the story when the true evil being appears and I think that she will pop up again in the next book… I can see the hero that she would try to take control of already, again not going to spoil that, and I look forward to seeing what plans and traps she and her sisters will be planning in the future…

As for style, the author writes well, and I didn’t come across anything in the  story that pulled me out of the world. I did have a moment wondering if the heroes would ever get to their goal for all of the problems that confronted them. I understand that this was necessary to make them all a cohesive fighting force and the climax of the story makes good use of that. I just wonder if perhaps one less battle sequence and one more reveal of the evil side would have been a better thought?

Otherwise, it’s a tight read, well edited and a pleasure to read…

I’m giving this work five pitchforks out of five.

An excellent read, wonderful characters and I did rather like the succubi that appeared in the story. I will be looking for the next book in the series and I hope that appears soon for there is so much to be still told…