A review of Demon in Blue Jeans by Toni V. Sweeney

Some of the short stories about Succubi and Incubi have their own little quirks, stories, and characters that make them a lot of fun to read. They might be short, but that doesn’t matter when the story itself makes them special.

I came across a short story which has an Incubus in it that is, quite simply, the most odd Incubus character I have ever discovered in my readings ever… 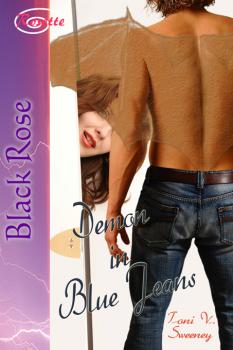 Kate wanted a dream man. What she got was an underachieving demon for a one-night stand. Problem is…she’s fallen for him, and he’s on his way back to Hell–mission accomplished!

Kate is, when we first meet her in the story, full of bravado with her friends, but underneath she’s hiding a secret that will come back to haunt her.

After seeing a movie, she flippantly makes a wish to the Devil to send her a man for a one-night stand, and to her surprise he appears at her door the next evening.

His name is Zel and he eventually admits to her that he is a third-rate Incubus that has been sent to her as a test. The pair stumble over quite a number of missteps by Zel, who is always checking a little device he has with him for what to do next. Eventually they make love and what happens next is at first heartbreaking, but not totally unexpected.

Not going to spoil the story, but needless to say, Kate is crushed when he vanishes and Zel’s being with her has consequences for them both.

Kate was interesting as a character although there are moments when I didn’t like her a lot. That happened at the beginning of the story, but that might have been the writer’s style of her words and actions than anything else.

Zel was, to be honest, just about the most insecure Incubus I have ever seen in a story. While that can be chalked up to his experience, it was somewhat unsettling when he first appeared in his actions, which were really over the top to be honest.

But despite the flaws in the beginning, one of the major ones for me being a point at which actions by Kate are written in brackets like this: (Nod, nod.) That took me out of the story for a moment and it took me about three pages to get back into it totally again. The rest of the story, the moments Zel and Kate are together and what they reveal to each other in the bedroom more than made up for that little distraction in the work.

I’ve said it many times and I’ll say it here as well, that the problem with very short stories is that they leave doors open too many times or are rushed into making things happen that you wish would extend over several pages.

The writer’s style, save that one moment of describing Kate’s movements, is clear and well done, although again, at the beginning of the story, it was odd reading the spoken words of Kate’s friends and wondering why every single sentence by them ended in an exclamation mark.

I have the feeling that it wouldn’t be that difficult to continue the story of Kate and Zel, there are ample open doors at the end of the story for that to happen. I also wonder if instead of ending the story where it does, that the author doubled the length of it and make the resolution of the story something more meaningful than can be explained in a couple of pages.

Still, as I said, there is open doors for more in the universe to be written and wish that the author would have done so, but considering that the story is from 2008, that never did happen…

I give this work four out of five pitchforks…