The video says it’s about a Succubus, but otherwise?

A Review of Complete Circle by Roxanne Rhoads

There are, of course, all sorts of different Succubi in the universe. The thing of it is that I prefer that a Succubus of whatever background she is, be not the stereotypical idea of one. I really don’t enjoy the concept of a Succubus that is a bimbo, or acts like one, or just seems to care about sex and nothing more.

I had hoped that the Succubus in this story would be less of a caricature and central to the story. Regrettably she really wasn’t as the focus of the story fell upon the other characters in the story, but that was expected from the story outline. 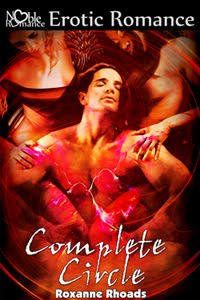 Lissette is a vampire who has lived with her succubus girlfriend, Cassandra, for a long time. She swore off relationships with men after being viciously raped by the vampire hunters who killed the love of her life and left her for dead.

Lissette and Cassandra only use men to get what they need, blood for Lissette and sexual energy for Cassandra. They are completely satisfied with their lives- until a mysterious stranger comes along.

For the first time in centuries, Lissette wants a man. Why is she so drawn to him? What is he? Much more than a mere mortal, Gabriel has been searching for Lissette and Cassandra for a very long time. They have what no one else can give him. But will they be willing?

We begin with Lissette watching Cassandra dancing in a men’s club, the two of them looking to feed on the men around them. Interestingly, it is noted that Succubi do not feed on women, which is interesting, but Lissette can and does feed on Cassandra if need be, noting that the taste of Cassandra’s blood is very delicious to her.

There isn’t a lot more than can be explained about the plot of the story, because save for the sex scenes and the reveal of how they all got where they are and where they are all going, there isn’t much else to discuss.

Lissette is the focus of the story, she is of course a vampire and she has a past. That past is tragic and horrible and explains why she acts as she does. It doesn’t however really explain why and how the relationship with Cassandra works except in touching on that only fleetingly.

Cassandra, the Succubus of the story, is less of a main character and more of a secondary one I think. She has several scenes and is the core of how these three characters meet, but she’s a bimbo in many ways. From what she says to how she acts, it’s like most of her intelligence goes out the window when she can have sex.

I have to admit that bothers me a lot. It does so because I had hoped that there would be more of her than “the bimbo”, but that didn’t happen. Still, from what little we see of her, she’s an interesting character with an interesting past. Just a shame that we didn’t get to see a lot of that.

Gabriel, he is an interesting character. I can’t reveal what he is, because in doing so you reveal a few key plot points and that’s not fair to anyone that wants to read this work. I will say that I didn’t expect him to be what he was, nor did I expect his effect on both Cassandra and Lissette. It was well played I thought overall.

The story was written well, the sex scenes were hot and there was a little bit of character development which was nice to see. It was far too short of course, but then a lot of the works from Noble Romance are short.

But I can’t get over Cassandra. It was… too simplistic how she acted and what she did. There was I thought more attention given to Gabriel and Lissette as the main characters of the story, but there should have been more depth to Cassandra than we were given here.

I’m going to give this story 3 out of five pitchforks.

It’s not the worst Succubus story that I have seen, not by far, but it could be so much more…