A Review of Lilith by Christine Emmert

Earlier this summer, I stumbled across a publishing company that stated its goals as being about the telling and exploration of myths and legends. It is called Dante’s Heart and their website can be found here. They have released some online collections since 2007 according to their site, but recently dipped their collective toes into publishing works in the Kindle format.

One of these works caught my attention as it was entitled Lilith, and seemed, from the description, to be about the Lilith mythos as it related to someone in our times. As such, this was something not to be passed over and I purchased it for my collection. 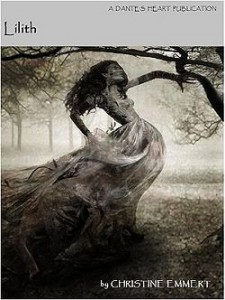 The story is described as being:

The enemy of every hearth, Lilith visits homes and devours children. When a graduate student writing a thesis on Lilith meets the demoness in the shape of a barn owl, she sees the perfect research opportunity … until she learns Lilith is hungry for her child! Will Evelyn be able to protect her son from the owl’s tearing beak and dark heart? Will she be able to keep her husband from falling to Lilith’s wiles? Will she be able to learn who — and what — Lilith is in time to save her child, her marriage, and her mind?

Evelyn is writing a thesis on Lilith that has consumed her to the point that because of her need to learn of Lilith, has managed to call onto her the aspect of Lilith contained in the form of a barn owl.

Evelyn, her husband and child are staying at a farm while she finishes her work. She enters the barn there and discovers the owl whom she comes to find is Lilith. And Lilith tells her that she is hungry and will consume her child soon.

The story is less about the succubus part of the Lilith mythos than the questions of submission, relationships and how myths can be found in each of us. That is not a bad thing as it makes you think about your own relationship to the myths that you find interesting, but also, brings an aspect of the myth of Lilith that is, quite honestly, not seen much of.

In doing so, the author manages to keep Lilith in her owl form through the story, that being to me at least more threatening than her human form or any other that she has taken. The descriptions of Lilith’s thoughts are quite chilling in their animalistic nature of needing to consume the flesh and souls of the children of all things.

It is truly horrific at times. But that horror is not splashed on the page like a horror movie, but instead is suggested to leave the actual event to settle in your thoughts and gives consideration to what Lilith had done to others in the past and will continue to do so.

There is actually very little sexual to be seen in this work, but then it is not mean to be, I think, a sexual story. There are moments of tenderness between Evelyn and her husband, the love that she has for her child, to stop Lilith from taking her child away, that is wrenching at times and makes this a fascinating work to tell tale of Lilith and one woman’s choices in trying to resist her powers over her and her family.

While all of this makes the story a good read, it cannot be one of my personal favourite stories. There are parts of this work that I do have issues with, the reveal at the end being one of them. I was expecting something more… telling I suppose in what Evelyn’s choice becomes.

It does not, truly, touch upon the Succubus myths that are connected to Lilith, which is a shame. But that is required for what Lilith is focused upon in this story. It is not souls or sex or dreams, it is having a physical meal. Something that is not really touched upon anymore in the stories of Lilith save for the occasional horror story.