A review of Succubus Comes Home by Lucy Felthouse

There are some stories about Succubi that are, unfortunately, quite short. As a result they appear in anthologies and collections that don’t really lend themselves to being seen. It’s rather satisfying when an author publishes their works on their own so that they can be seen by those that look for stories about Succubi… Like me. 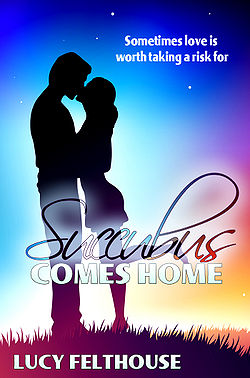 When Alice meets Antony in a bar, she’s taken aback. As a succubus, Alice is well used to the love ’em and leave ’em lifestyle. But there’s something intriguing about Antony and she can’t put her finger on it. When the truth comes out about Antony, how will Alice react? Will she be willing to take a risk for love?

The tale itself could be seen as one scene in a longer story about the pair, but it is just slightly longer than an erotica flash story. It’s hot in the right places and I found myself caring about the two characters a lot well before the reveal happened in the story.

The writer gave Alice soul. What I mean by that is she seems real, acts like it, and has within her all of the signs of a complex character that is trying to figure something out about herself. That again brings me back to the problem of the story being so short.

There is so much more to do with her.

As a Succubus we actually don’t see a lot of what Alice does or how she really acts as one. Nor do we know what she really looks like as a Succubus. There is no mention made if she has horns or a tail, but in the world of the story here that’s not the important thing really. The story itself is.

And that story is well done. The care placed in characters, setting and writing reflects I think how much  the author cared about writing this story and sharing it…

To talk about Antony in any real detail would spoil the surprise of who and what he is. I’ll say that I felt his character was right in relationship to Alice, and the reveal was really well done and completely unexpected when it appears in the story…

I’m going to give four pitchforks out of five.

Would have loved to know more about them both and the world they are in, but perhaps there will be another story sometime to explore all of that.