When a date with a Succubus goes really wrong…

A review of Behind the Demon’s Mask by Nathalie Gray

I occasionally pick books by their cover or after having a recommendation from someone I know. In this particular case, the book I am reviewing this week, was a recommendation with the note that there really wasn’t anything Succubus like in the work, but it was a hot read and I might like it…

And so, it found its way onto my Kindle and I gave it a chance. It wasn’t what I expected, but I did find the story interesting nonetheless… 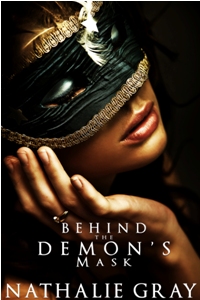 Behind The Demons Mask by Nathalie Gray

When Jasmine’s last relative dies, she’s left with a mystery—an old tarot card called “Il Tempo” and a key. She learns this key comes with a house along Canal Grande in Venice, Italy. Thinking she can settle her post-divorce debts, she decides to pay her inheritance a visit but quickly realizes the house is more than crumbling brick and mortar—it’s a gate. A gate to a world of masqueraded lovers and assassins, a realm where a mask can hide much more than a face.

We first meet Jasmine on her arrival in Venice and follow her trials and tribulations as she fights her way towards what she believes will be a wonderful inheritance.

But after a hellish path through the city she finds herself at an old run down ramshackle building that looks like it was a hundred years old and ready to fall apart at any moment.

Entering the place, she finds herself drawn into the orbit of a two men, one that wants her to fulfill what he sees as his destiny, the other trying to have that not happen.

But they are not truly men, they are demons, shadows in the real world looking to have Jasmine use the card she carries as the means to unleash them all upon the world and move from simple nudges to the wills around them into full control of them all.

And in spite of her own misgivings and fears, Jasmine falls into lust with one of them and love with the other setting the stage for what could well be the end of the world if she chooses wrongly.

Jasmine has her moments in the story. Occasionally funny, but generally so very unsure and luckless in herself that it became painful at times to read all of the bad things that happened to her. But when she is with Lumere, the moments are touching, warm and loving between them.

It’s a sharp contrast to what Vespero makes her feel and does to her. I thought it was strange some of the dream-like scenes in the work, how confusing they were and scattered at time her thoughts and the scene around her were.

It’s bothersome to me how she can be so strong at one moments and fall apart in the next when seemingly little things go wrong for her.

Vespero is very evil, possibly evil incarnate in the work, but while the deeds he creates and the things that are eventually done to Jasmine are to the point of torturous, within his own beliefs and understanding, what he does is best for him and not one else.

That’s in sharp contrast to Lumere who quite simply would do, and does, anything and everything for Jasmine. But his reward for the most part is facing her disbelief in him and more so that any of what happens to her is real.

I wonder if there is a story about him to be told?

The writing was well done, no real moments where I was taken out of the story, but I do have to say that the overwhelming amount of angst that Jasmine suffers from throughout the story at times felt over done and over wrought.

Still it was an interesting universe with a premise that was seductive and gave life to the old saying of “having a devil on your shoulder.”

I’m giving this work 4 pitchforks out of five.

Good length, interesting characters and plot but the heroine’s internal monologue and doubts needed to be toned back ever so slightly…