Succubi Image of the Week 184

I found a rather interesting stylized Succubus this week to share on the Tale. It’s another one of those images that I don’t have any idea of who the artist is, but I think that it’s a really delicious bit of Succubus art… 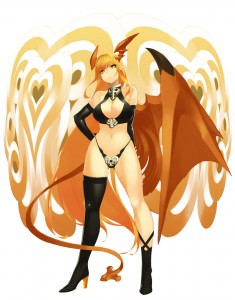 I think that this is interesting in a couple of ways. First that her horns aren’t quite horns really as they sort of look like something that the Greek god Mercury would have on his head. The wings are interesting in that she seems to have only half a pair, perhaps she’s making them vanish at this moment?

It’s also an odd shape to her tail, not quite a spade or heart shaped one really. It’s also interesting that her clothing, at least her boots, aren’t the same… almost makes me wonder if she is a succubus pirate or something…

That would be an interesting story idea wouldn’t it?

As always, any details on this work would be appreciated in the comments!