She’s a little young for a Succubus isn’t she?

A Review of Portrait Of A Succubus by Gerald Dawson 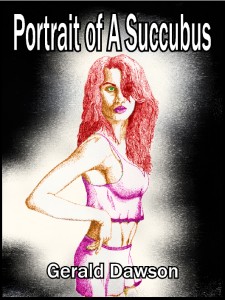 Occasionally the shorter stories about Succubi are, in their own ways, interesting in how they convey their existence and what they must or must not do to survive. Occasionally those descriptions are either off the wall, or seem to be not quite the way I see Succubi or Incubi to be. Now that’s not a criticism in itself, every author makes their own universe and characters and to that they must be true of course…

The summary of this work is:

Tristana, as she is known for this adventure, has lived since the dawn of time. Her sole purpose these days is to seduce mortals and steal their souls. Jerome is an artist, and even as the body cools from her last victim Tristana sets her sights on having his unique talents create a portrait of her, of course intending to steal his life and soul when it is complete. Her beauty is beyond measure.

The story begins in the aftermath of Tristana, the Succubus of the story, as she has claimed a soul. What that person is, and what their particular desires were, didn’t do a lot for me, but that is the author’s decision, so I won’t dwell on that part of the story.

Tristana’s true form is somewhat monstrous in nature, we get a good description of that at the beginning of the story. She’s described as sort of a reptilian creature in black, but she has been many different mirages of women in the past and we see her shift between some of them in the story.

Her, and for that matter, all Succubi in this story’s history is not what I expected. It sort of combines a few different myths and legends and then attributes them to the Succubi. I can see where the author is going with that idea, but it seems to be a little outside of the normal mythos of Succubi, both in their past and their form.

Again, that is the author’s choice.

I had the oddest feeling when reading this work that it was part of a larger story. It felt like we came into the story many chapters from the beginning and then moved to the climax, in more than one way, of the story far too quickly for my liking.

I also found myself slightly put off at some of the descriptions of the sexual acts between the two characters, as well I was taken out of the story a few times where one character or the other is speaking and we also get a description of what they are doing to pleasure themselves at the same time.

I know that this is erotica and it is about Succubi, but rushing through those moments between the characters just made the work come off the rails for me slightly. I will admit that there were a couple of subjects in the work that for me have a rather large squick factor, but then not every story is for everyone is it?

The author’s writing style is a bit abrupt in nature, and is ever so slightly on the crass side at times, but then, considering how Tristana acts in the story and her views on humanity, I can see how that would be reflected in the author’s writing here.

I can only give this work three out of five pitchforks.

The squick made it lose a point as did the crassness of some of the work.

What can I say, I just don’t like some of the themes in this work and that made it hard for me to enjoy it.