A review of Marlene by Peter Snjebjerg

I discovered a somewhat old graphic novel in a bookstore the other day. It seemed to have a Succubus in it, and I will explain that, but in the end it turned out not quite to be a Succubus in fact… 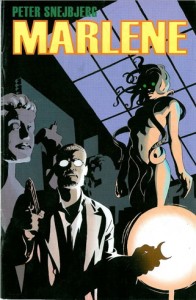 The story is described as being about:

A lurking terror has infected the town of Malborg. Madness and death haunt the luminous Scandinavian nights, and the victims all seem to have one thing in common: their lust for the voluptous Marlene.

As he investigates, ace detective Michael Joergendsen must navigate a dangerous course between his official duties and his own growing fixation with the young woman. Is he on the trail of a supernatural killer, or is it the other way around? And the beautiful Marlene – is she the innocent victim of an obsessive stalker, or is she something more sinister?

The story revolves around a series of deaths in a small Swedish village to which a woman named Marlene seems to be connected to. A detective investigates the deaths and eventually comes to the conclusion that the killer is a Succubus.

It is an interesting horror story that reminded me very much of some of the early Vampirella stories in how it was told and artistically drawn. There are a few sex scenes in the work, but they aren’t the core of the story. It tends to be more horrific in nature in several ways. The art does not overemphasize the sexual nature of the characters, in fact they are toned down for the most part in the work in favour of the horror points of the story.

The horror aspects of the story are emphasized, particularly some rather gruesome ways in which several characters are killed by the Succubus. It must be noted that the Succubus in this story is not, nor does she act, like the traditionally understood being. She is violent in her actions and acts more like an animal than anything else. As well, her appearance, when it is revealed, does not match with the usual horns and tail that are expected to be seen on Succubi.

She instead resembles another being called a Mare which is a common myth in the Scandinavian culture. However, as the creature is called a Succubus in the English translation of this work, and does use sexual desires as a weapon, there are some connections to the Succubus myths in it.

As I prefer the more sexual aspects of the Succubus myth, this work would not be one of the works I would point at as being a good example of a Succubus story. However, as a horror tale, and a work that embraces the myth of Mara, I think it is well done and did keep my interest through the entire story to see how all of the pieces of the story came together in the end.

I’ll give it three pitchforks out of five. Not what I expected, but still an interesting work to consider…