A review of Marlene by Peter Snjebjerg

There are actually quite a lot of YouTube videos appearing now and again. Some of them are teasers of ideas and some are a lot less than that.

Occasionally someone produces a complete story, if not quite a lot one. And this is one of those.

And if you can’t see it here:

This short is called Dreamgirl_666 and was posted by a YouTube user named jakerox1324. The short is produced by Dan Jordan, Kathy Hays and Cassandra Bencz. The director is Cassandra Bencz as well.

The story of this work could be described as, boy meets girl online, boy and girl meet, boy and girl go off together, girl becomes Succubus, boy doesn’t exactly have a good time, Succubus goes looking for her next victim.

I have a couple of problem with this, the biggest one being that the Succubus in the film is all about hack and slash and tons of blood being tossed around. Not exactly what a Succubus is, but then this is YouTube and you aren’t likely to see anything really sexual in nature on it would you? 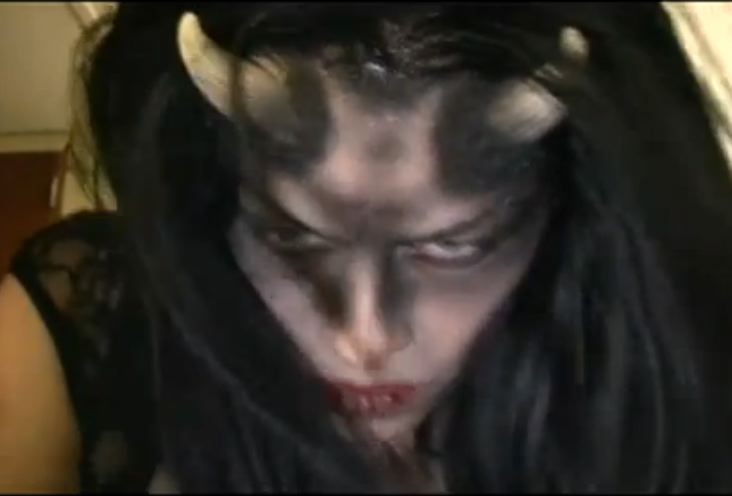 So let’s have a look at the Succubus…

In the film, her name is Lily and she is played by Andii Brooks.

I think the horns are really well done, they match her skin tones really well I think. The black smudges I am not quite so thrilled about, I wonder if going with body paint to make her skin red would have worked? No tail of course, that would not be possible and if there was it wouldn’t look really good to be honest.

I’m not showing the “human” version of her, but I thought that giving her flowers in her hair was a cute touch, they are about where her horns are in her Succubus form. I also thought she acted “succubus” like, her walk, voice and so on were just about right. It was also interesting that the other women in the film disliked her on sight, which is in some cases, true in the case of Succubi in many stories…

So from the point of, is she a Succubus, the answer is yes, to a point she is. The ending of the story and what she does to her victim is, I admit, not to my liking and that’s a shame as she actually portrays the mood and actions of a Succubus really well.

I also thought it was interesting that she uses chat and the internet to find her victims, which while again not with the traditional mythos, does make sense in the film and ties the beginning to the ending well.

So, quite a decent work, really better than I expected when I first saw it. The blood was over the top and not really needed, but such things are, of course, the filmmaker’s decision aren’t they?