Succubi Image of the Week 178

I have never given a costume anything less than a zero. Now that’s mostly because I have tried… really tried, to say nice things about the costumes I have found. I hope that, somewhere, there is the slightest bit of Succubus goodness or evilness in them…

But then I came across this. 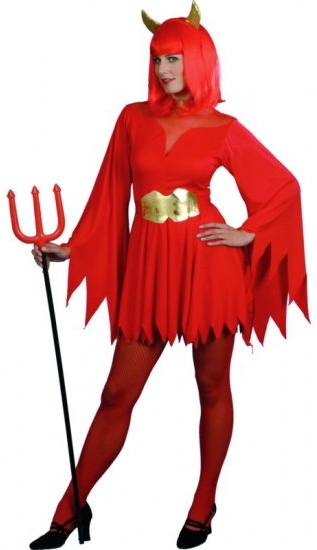 I give you the first negatively rated costume on the Tale, and it really is well worth the negative rating I’m going to give it.

This costume is described as being a Devil Sexy Costume. It comes with the red dress, the gold belt and the horns according to the description. The red wig, pitchfork, stockings and shoes are not included, but really that doesn’t matter for the ugliness of this costume.

Perhaps that is the thing that drives me crazy about this more than how ugly it looks. How can this possibly be worth that much for what little comes with it?

There is nothing sexy in it, the dress is lousy, the horns are as well, the belt… the belt I can’t think of a description of it that didn’t include the word ugly in it.

Where is the sexy? Can someone explain that to me?

Maybe this is something to be worn when there are lots of young children around, I’ll grant you that they wouldn’t see anything but the high level of ugly and silly that is in this, but really?

There is not one thing, not one single thing in this costume that I like, would like, or vould fix into something better than it is.

That’s quite an accomplishment really…

This gets a minus one out of five pitchforks and will be tossed into the local bonfire as soon as possible.

Now all I need is some brain bleach to forget this…