Syfy adds Lost Girl… Is this a good thing?

A Review of Slave To Her Desires by Jill Myles

One of the series that I like very much is the Succubus Diaries series by Jill Myles. As part of that series she has released a number of short stories from that universe. You don’t have to have read the series to follow the story in this particular work, which is nice, and I think that it is a interesting first step into that universe if you aren’t a reader of it.

That’s a shame really as the author recently announced on her Blog that her publisher will not be supporting her in releasing the fourth book of her series and she is looking into self-publishing it. It amazes me that people seem to ignore good writing and characters.

This story, Slave to Her Desires, I think showcases that talent really well… 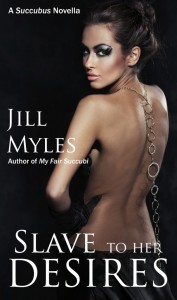 Slave To Her Desires by Jill Myles

Immortality is not always a blessing. Turned into a succubus against her will, Olivia Rhodes has lived the past 120 years as a slave to her cruel and vindictive vampire master. She’s escaped him, but he’s closing in fast. Her only hope? The fallen angel that abandoned her when she was turned, David Thornton.

But David’s not the cold-hearted monster she’s always thought he was…nor did he abandon her. And when Olivia’s hatred of David turns to desire, will her need for revenge against her vampire master destroy the one beautiful thing in her life, or will she find a way to make David love her despite the creature she’s become?

The story begins with Olivia Rhodes, the Succubus of this story, on her way to see a fallen angel, known as a Nephilim, who she believes will know where David Thornton, one of two beings that transformed her from human into a Succubus will be found so that she can demand of him something she wants more than anything else in the universe.

The death of her other master Aloysius, a cruel vampire.

She has a great deal of hate in her heart for David, but more so for Aloysius who as the story progresses and we learn more about him, is probably one of, if not the more evil and cruel of Masters that I have ever read in a story. Specifically the things he does to Olivia through the story.

And that was, I have to admit a problem for me.

Olivia has no choice when she is ordered to do something by either of her Masters. The way you become a Succubus in this universe is that you have sex with both a vampire and a Nephilim. As part of that your body changes, becoming more sexual and you get something that the Succubi call “The Itch.” In short you need to have sex every couple of days or you are in real trouble. But in addition to that, whoever transformed you has control over you and in doing so can do just about anything to you, or make you do it.

That last part is where I had problems. Not with Olivia herself, but in what Aloysius makes her suffer through. The sexual things I could deal with, they weren’t that bad. What got to me was the description of what she was forced to do with razor blades to herself by him.

I found myself not wanting to continue the story at that point and, I admit, I stopped reading it for an hour or so. That’s not because of the writing style, but the pain and suffering that Olivia had to suffer through. I’m not really thrilled with pain and suffering and so when it appears in a story I have issues with it.

And I honestly didn’t want to see if that continued through the story. I won’t spoil the tale save to say that getting past that point did have a reward for me in reading it which I appreciated very much.

Olivia as a character was tragic, There was so much self loathing in her thoughts that it was like a black cloud of destruction was always there with her. I also wasn’t thrilled with the view of most of the characters in the story that a Succubus was a worthless being “good for nothing but sex.” There’s nothing like having a terrible opinion of yourself and follow that up with the world beating you over the head with it.

David is, really, the light of the work even if Olivia can’t see that until the story arrives at it’s climax. He is however like a fish out of water in the story and that was played well I thought in so many ways. But what I enjoyed the most about him is that he has honour in him. That honour makes him very special in this universe and makes a difference to Olivia when she comes to terms with her own feelings.

Aloysius was simply the villain of the story. You are meant not to like him and from the first moment we learn of him that’s not difficult to do. You want Olivia get her revenge on him from the first page just from what she was forced to wear by him.

The story had all of the earmarks of Jill’s writing. Lovely writing style, characters that stand up on their own, scenes with emotion and a story that wasn’t there just for the sake of being there but to add to the universe she has created.

For those that haven’t read her series, I really think you should start with this story and see what her stories are about and how the universe is constructed. While Succubi do not have horns and tails like I prefer, they do have heart and soul and that is what really matters.

I’m giving this four and a half pitchforks out of five.

That would be a story in itself.