A review of Demons Are Forever by Wynne Hayworth

One of the more interesting premises I have found when it comes to the appearance of Succubi in novels and stories is the attempt to make them not supernatural beings, but instead ground their existence in the world of DNA and humanity. But what happens when humanity itself is changed into things that once were but should really never be once more? 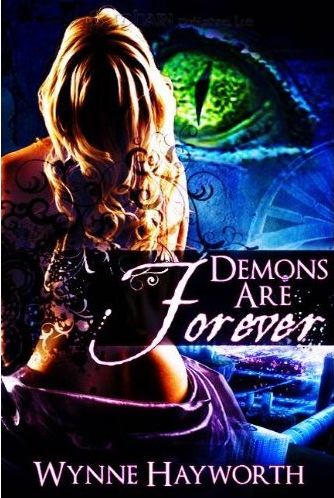 Demons Are Forever by Wynne Hayworth

The book blurb describes the work as:

Evolution got an astronomical kick in the pants. Now it’s kicking back…

Afterglow. Our world is changed. Mutated. Now home to humans who possess DNA belonging to creatures once thought to be only the stuff of legends. So what if the neighbor howls at the moon every month? No big deal as long as he mows his lawn.

A savage killer munching on helpless victims, however, is a big deal to Detective Buck Shand.

Buck is thinking less legend and more nightmare as he surveys the most recent in a series of brutal slayings. It’s beyond even his special talents, and he’s going to need help with this one. It arrives in the shapely form of Dr. Lian Herrick, a woman with her own form of Afterglow mutation—a demon that will shake Buck’s everyday world to its foundations and turn his brain inside out.

Will their combined skills be enough to track and stop a savage killer? Possibly. If they can keep their minds on business and their hands off each other long enough to lure a beast who feeds on sex—then kills for pleasure.

This is the first story in a series of two works by this author, the other title in the series being Demons are a Ghoul’s Best Friend, a nice touch being that the two covers can be placed together to make a panorama image which is very sexy looking…

Past the cover, the idea of the trigger is very interesting and has some basis in scientific fact. A gamma ray burst strikes the Earth and human DNA is altered as a result of that. As part of that alteration, genes come alive in the generations after the event that have the effect of making the creatures of legend real.

So you have vampires, werewolves, shapeshifters, elves, and so on in this new world. While there are still “normal” humans in the world, they are now part of a larger transformed existence and that’s the entry point to the story for us as readers.

A gruesome murder, and it is really awful what happens to the victim, brings the police into the trail of a serial killer in the city and as part of that investigation, Detective Buck Shand steps into the mess trying to figure it out.

He is a kind of empath, one that can see what others see in their last moments and he gets images from the murder that make his stomach turn. Soon after that happens, we meet Dr. Lian Herrick, who is attached to the case through the local government and the two of them work to solve the mystery before more die.

Buck is interesting in that he has personality and will, but is somehow lost in his own skin. At times he seems like he’s afraid of caring and tries not to, but then Lian appears and that quickly changes.

Lian is Asian in features and background and is, quite simply, possessed of the powers of a Succubus. Not in the way of taking someone’s soul, but rather that she can see into others during sex and, if she isn’t careful, can mind control them to an extent. She also can, through letting her powers become completely free, arouse anyone around her, and that’s a moment in the story that is half amusing and half very seductive as an idea I thought.

The author writes well, though I thought that at some points the story seems a bit too frantic for my taste. What I mean by that is there are moments when the story falls into a habit of “tell” and not “show.” It didn’t feel right when the characters were described in their full names rather than in first name only or when it was apparent who was talking to add the point of telling the reader who it was. I’m guilty of that myself and I’d love to have a better handle on how to do that right.

Other than that one quirk, I thought the scenes were well constructed with the right feel to them. The sex scenes, especially the ones where Lian’s Succubus appears were very hot and really were some of the most interesting views of what a real world Succubus’ control, or lack there of, would seem to be like for them.

The story ends with unanswered questions, you would expect that with a second story to be read, and I thought that the supporting cast were very well fleshed out and were a credit to the story. The world fits together well and I didn’t see any gaps in it that drew me from the work, which is the mark of a good author.

I likely will read the second story if for no other reason than to see how, and I hope it does, develop the relationship between Lian and Buck. While that was well explored and developed here, there are a few questions that need answering that were posed in the work.

And I hate unanswered questions.

Rather pleased that I read this, and hoping for more about this particular Succubus.