A review of Artifact Angst By Tennessee Hicks

Smashwords recently released several stories on its site that have Succubi or Incubi characters in them and having the time to read some shorter works this week, I purchased several different novels of various lengths.

Some of these were released last year I realize, but then it takes me some time to first find them and second have the time to read them. Some of them are not worth it in the end, some are, and then there are some works like the one I am going to review here where I wished there was more to the story because darn it they have created interesting characters and a world to play in that I would have loved to see more of. 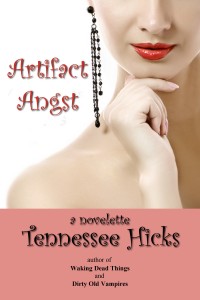 The story is summarized as being:

One didn’t let a Hell key disappear. Hades didn’t like the idea that anyone might get out. Natalie thought it’d be easy. Grab and go. A simple job complicated by the bewildering variety of antiques and other artifacts that decorated the Golden Anchor Inn. Even worse, she had competition, in the form of a nephilim named Peter. If she couldn’t find the key in time there’d be Hell to pay. Literally!

Natalie is the Succubus of the story, and she is not quite what you would call a typical traditional Succubus. She isn’t from hell, although her mother was a nymphomaniac and her father was an Incubus. She has pointed ears which she is forever trying to hide in her hair, the colour of which we never learn in the story. She is green eyed of course, likes red, in just about everything including clothing and her car, but she has no horns or tail in the story nor wings of any kind. In the story as well, she is more of a fighter, using knives and swords and defending herself in hand to hand combat, which for a Succubus is something different than what is usual.

She is however on a mission that will decide whether she will stay on the Earth or be pulled into Hell. Someone stole a Hell key and has hid it away and she has been sent to find it. Arriving at an odd place called the Golden Anchor Inn, she settles in to touch every single item in the place. I mean by that that she has to touch everything in the Inn save for a few specific items to find what that key has been hidden in.

She comes face to face with Peter, a Nephilim that is described as looking sort of like James Bond in a way in his looks. They come to an agreement about the key and they go off in their own directions to find it…

But time is running out and there will be surprises for them both.

Natalie, I have to say, wasn’t exactly what I was expecting so far as a Succubus goes in the story. There was a bit more violence around her than I would have expected, we didn’t actually see her using her Succubus powers much, if at all, and that was for me a little disappointing.

Peter was as well somewhat jarring in his sort of condescending attitude at times, but as an opponent to Natalie he was well suited to counter her moves with ones of his own.

I won’t spill who wins the contest in the end, but I will say that for me this story could have been a lot longer than it was. I realize that the author did this as a writing exercise, but they note that they became “hooked” on Natalie as a character and would like to revisit her and I agree with that absolutely.

They have really only scratched the surface of this world and with all of the background they have in it, it wouldn’t be that hard to get into another story about her.

But if they do, I would appreciate it if she was less introspective and more action or at least a bit more active with her Succubus abilities than the teasing little glimpses that we see in this story.

The author’s writing style is very good and I was taken out of the tale only at one point where the word “dinner” was spelt as “diner.” That’s a small editing miss, and I can ignore it, but where it happens in the story it was a shame as it was moving quickly towards the climax.

I can recommend this work as an good example of a head-strong, almost human Succubus that is fighting to survive in a world that isn’t doing her a lot of favours.

I’m going to give it four pitchforks out of five.

I hope that the author returns back to this universe soon…