A Review of Save My Soul by Zoe Winters

This time as a book review, I am going to have a look at a tale that is about an Incubus rather than a Succubus and how the decisions we make come back to haunt us eventually. The work is by Zoe Winters and is titled Save My Soul, the second book by this author in the Preternaturals series. 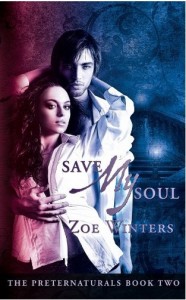 The story is set in and around a town called Golatha Falls. A woman named Anna Worthington returns to her hometown and for reasons she does not quite understand at the time, purchases an old house on Cranberry Lane with some of her inheritance.

All seems well at first, but then it appears that she has a visitor in the house.

A ghostly one. One named Beatice, and she seems not to want to have Anna there.

After an incident with someone she knows in the town from high school, the ghost is revealed to be an Incubus named Luc that explains he has been trapped there for fifty years.

Over the course of the story, Luc finds himself in love with Anna, and she with him. That relationship is strained by Luc’s need to feed regularly on women in the mansion, and Anna’s inability to break the curse that traps him there. The curse requires the owner of the mansion to burn it to the ground in order to free Luc, and Anna loves the house too much to do that.

She attempts every other means of breaking the curse, from the church to Wiccans to television shows about supernatural hauntings but nothing works. Eventually, things come to a head, a choice is made and the secret of why Anna was drawn to the mansion is revealed.

Overall I rather enjoyed this work. The characters were well defined and I felt like I had a vested interest in what happened to them. A few of them were somewhat irritating, such as the elderly sisters Bitsy and Mimi, who are the classic nosey old women in this story. Anna’s friend Tam, who is a witch and it part of a Coven in the town, was very interesting and it was a bit of a shame that we didn’t get more of her background than what we did in the story.

There is a however in my thoughts. That being the climax of the story, when secrets are revealed and the answers given, seemed to be very rushed to me. I thought that the explanation was a good one, but, it could have taken a longer period of time to get through. Not to mention that the resolution at the end of the story seemed almost like a powerpoint presentation. That was a shame because the rest of the story was well done, written and had the emotional context it should have in it.

There was a noticeable lack of heat in some of the more intimate moments in the story. We are taking about an Incubus here and you might expect that those scenes would be very hot in nature, but for the most part, when Luc is feeding on others to the dismay of Anna, there is really nothing given of those moments.

The story leaves several doors open at the end of it, some spiritual, some relationships, and some interestingly vague. It wouldn’t take much to continue the story of Luc and Anna further, but based on the first book by this author, which I won’t review on the Tale because there are no Succubi or Incubi in it, I have the feeling that these characters will never return again.

Which is a shame.

A bit more heat, a little more closure, and perhaps a better close and this could have gotten five…