A Review of Lilith by J. Daniel Sawyer

There is a SuccuWiki entry for a work about Lilith that I discovered in my searching on Amazon.com. I noted that I would be adding a review there in the future, but first I am going to place that review here on the Tale.

This particular author,  J. Daniel Sawyer, has written books, made audio works and video content as well, all of which can be found on his website which is noted in the book summary below.

The work I am going to review is called Lilith and is by the author J. Daniel Sawyer. 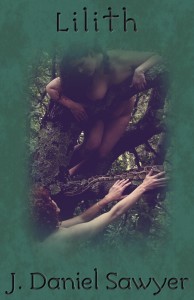 This work is taken from an original podcasting of this story by this author on the Sculpting God podcast which is available on iTunes if you search for it. However, the release date of that audio version of this work was in 2008 and, for some reason, while iTunes sees the podcast and the episodes, this particular one, episode seven, does not seem to be available.

As it is a kind of transcription of an audio work, the length of this book is rather short, but does include a lot of things to think about when it comes to Lilith and her mythos…

The story is written from the viewpoint of Lilith thinking about what happened in the time of the Garden of Eden and her relationships with Adam and Eve. The story begins with the first stirrings of existence in the mind of Lilith and ends with her leaving the Garden of Eden, Eve on the ground beside the Tree of Knowledge in her wake. Between those two well known moments in her mythos, Lilith’s reasons for being are given, and her means for existence are explained.

What is interesting as well is that in this telling of the story of Lilith, she declares that she was the first to awake and that Adam followed her. She tells of the first time they were together and what her actions in wanting to dominate to an extent over Adam resulted in. She talks about her sadness in Eve the first time she appeared and how, with the help of the Serpent, who she claims dominion over, made Eve taste from the Tree of Knowledge.

I found it unique how dominant Lilith’s “voice” is within the story. Her views are strongly held, as would be expected, but what is more telling is that she cares little for what she has been made out to be by the stories told about her and is more concerned with stating, for the record as it were, her needs and wants that could not be accepted by Adam or for that matter what she calls “The Voice.” It’s also telling the sadness that appears when she speaks of the moment when she realized that she had been discarded by The Voice for Eve and how much she felt that Eve was a pale imitation of herself.

The one thing that is disappointing to me is how short the story is. I fully understand that it is a transcript of an audio book, but it would have ben nice for the story to be expanded upon, if not within the actual work as presented, then a postscript to it that might share something of her life after the Garden of Eden and perhaps more than that.

I would have liked to hear this work in its audio form. My thoughts are whether or not a strong woman’s voice was used to portray the work or if something more seductive was the choice. Of course it is also possible that the author himself told the story as if he was speaking from the written words of Lilith herself.

It would be interesting to know either way.

I’m going to give this work three out of five pitchforks.

I think it is far too short a tale and, really, there is much of Lilith to consider story wise and that would have been nice to see.