Succubi Image of the Week 127

This time the costume is… well… slightly dommish in nature and, for the first time, the Succubus carries a whip… 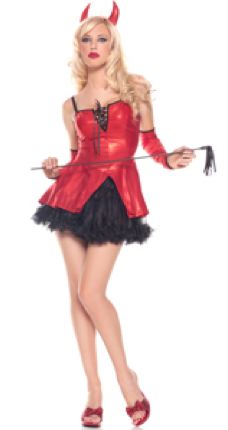 Now mind you, that doesn’t save this costume in the slightest, but nonetheless it is different from the usual Succubus costumes that appear here and there…

Now this particular costume is not available as yet, but it is on preorder on sale at the site that I have been going through this month….

What you get, for $58 US regularly, but $47 on preorder,, is the red vinyl-like dress, a pair of devil horns, the whip, and a pair of red fingerless gloves in the same material as the dress. Extra items in the picture include the shies, which are $49. The black crinoline petticoat and the ruffled panties are $18 and $14 respectively.

I can’t say that I really like this idea, I have issues with the dress itself. I wonder what it would look like if the dress was longer, say to mid-thigh instead and more tightly designed around the woman’s body.

I would also lose the fingerless gloves and replace them with opera gloves of the same material as the dress.

That would I think give it a far more domme look to it and even if it cost more, which it would I expect, the overall look would be worth the expense.

As it is, I can only give this two and a half pitchforks out of five.

Can do better, look sexier and more dommish.

But it’s a start at least…