I wish I didn’t see this movie…

I really do… Actually I want to get my hour back of my life that I lost while watching this, but I’ll get back to that a little later on… 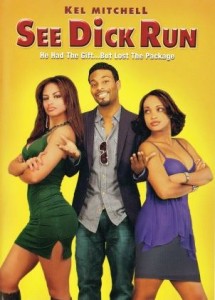 The movie that I am going to review today is called See Dick Run. It was released in 2009 and is a comedy starring Kel Mitchell.

Kel plays the role of Richard Jones, a fast talking guy that has pulled his game of telling lies to get his way with lots of women in his past.

But after meeting one really sexy girl, he discovers that something is missing from his life… His “dick”.

Eventually, he sees a Voodoo Priestess that tells him that someone in his past placed a curse on him and he has only until midnight that day to apologize for his past actions in order to set things right, and reverse the hex on him. But the question for him is, which of the literally dozens of women that have a grude against him did this and why?

The following is a trailer on YouTube for the movie:

And in case the embedding doesn’t work:

If you pay attention to the trailer, you will notice two scenes in this movie. One has the point in it where the shot turns green and Richard gets assaulted by his hot date. The other scene is where the Voodoo Priestess reveals that he was attacked by a Succubus summoned to be used against him. This next video is the first scene as played out in the movie that shows the Succubus that steals his manhood…

A couple of things that I like and dislike about the Succubus in this film, I’m not going to really review the rest of this movie, you can get that in a lot of other places and really that isn’t the focus of my site anyway… I didn’t really like all the humor in it, and I found myself fast-forwarding through a lot of it. ((The repeated scenes of seeing that something was missing did so on a lil long)). There are only a few places that we see the Succubus, and so that’s what I am going to concentrate on. 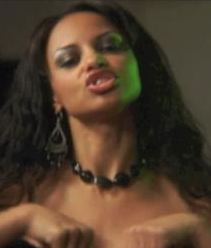 The Succubus is played by Heidi Marie Wanser, the image to the left is her in the movie at one point in the first scene she appears.

She’s really very beautiful, and this screenshot doesn’t do her justice to be honest. You can find out more about her at the IMDb here.

She makes for a deliciously sexy, seductive and evil succubus when she first appears. I like the way she moves and taunts her prey in the movie as well… The striptease she performs is wonderful and I love the boots she’s wearing as part of her outfit. I just wish that they had done more with her in the movie because, really, I think her character is wasted for the most part in the movie after the first scene she appears in.

But then, that scene has some real issues for Succubus lovers… After she gets close to Richard then the scene moves towards all green lighting and it goes downhill from there for me.

That scene, as shown above in the second YouTube link, just isn’t as sexy as it could have been. i know that this is a comedy and was rated for general audiences, but when the scene consists of Richard getting thrown around by a screaming woman…

That isn’t close to being Succubus-like to me.

Ignoring the green scene, and just looking at the rest of her appearances, I give the Succubus in this movie 3 pitchforks out of 5. But as a whole, that drops to 2.5 out of 5 looking at the actual Succubus attack they show.

She could have been amazing…