Succubi Image of the Week 37

The next article in the SuccuWiki, which will be posted tomorrow, will be the 333rd article in it. I’m trying to average one entry a day so that something new gets to it at a regular pace…

And the top 10 pages viewed on the SuccuWiki are:

Today’s entry was on the Reaper Miniature called Virina, Female Demon. She looks very much like a World of Warcraft Succubus really when you consider her…

This is a concept drawing of her by Tim “Talin” Collier. 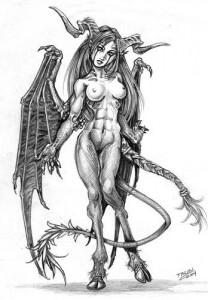 Just looking at her hooves and tail, I think she was the basis of the WoW Succubus… Maybe not totally, but she certainly resembles the WoW one…