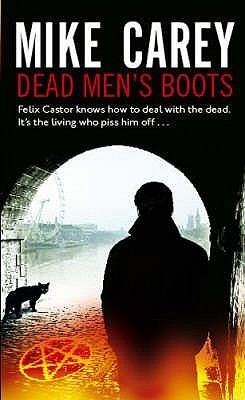 This follows on from ‘The Devil You Know’ and ‘Vicious Circle’ is the continuing story of Felix Castor, the exorcist. Set in London where the undead appear with alarming regularity, the cast of characters includes Nick the zombie who hopes to improve his shelf-life careful body management, which includes sessions in the chest freezer, a sort of an undead sunbed.There’s Juliette, who has chosen to live with a woman. Being a succubus, she can only consume the souls of men when she mates and that doesn’t get the washing-up done. Less of a bunny boiler than a man-hunter.Felix is relatively normal apart from his skills at ridding the unwelcome visiting dead. His skill is musical; he uses a penny-whistle to ensnare the uninvited souls and sets out to help the widow of an old friend. She is worried that her husband, John Gittings, is not resting easily. Then there is the added complication that John, who was losing his mind before he palled up with a shotgun in the bathroom, has changed his will. A lawyer turns up to halt the funeral and insist on a cremation.

Meanwhile, John’s sprit seems to be blundering around his widow’s flat and is not happy. Felix is determined to do right by his client even if it means levelling his bank account.Meanwhile, a paying client contacts him and she wants some answers, too. Her husband has been arrested for a brutal crime that includes male rape. He has changed from a meek and mild-mannered man to a solitary cruising, predatory homosexual. Felix suspects possession but needs to prove it.Carey creates a scenario of growing dread. The dead are walking, talking and even paying taxes. There’s something not quite right with this.

There’s a hell of a battle coming but Felix Castor manages to maintain a grim determination and a steely sense of humour through his gritted teeth and battered body and soul.Carey has a laid-back style that keeps your reading. Once again, he has produced a good solid story with an intriguing and continuing thread that ties all his three books togetherThis is Columbo for the ‘dawn of the dead’ generation. Felix Castor, who reflects our own bumbling and stumbling attitude to problems, will win through. Great stuff. Articulate and pissed-off zombies, make a change from the usual meat-puppets. They’ll be getting the vote next.