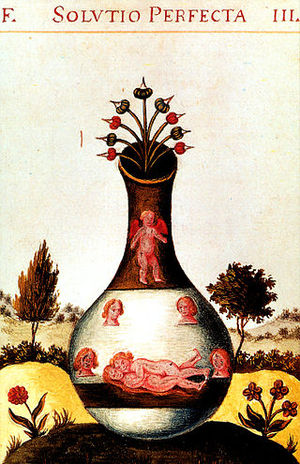 Alchemical processes were symbolically illustrated using images of humans and animals inside of vessels. This contributed to the legend of the homunculus.[1] (Pretiosissimum Donum Dei 15th century.)

Homunculus (masculine, Latin for "little man", plural: "homunculi"; from the diminutive of homo) is a term used, generally, in various fields of study to refer to any representation of a small human being. Popularized in sixteenth century alchemy and nineteenth century fiction, it has historically referred to the creation of a miniature, fully formed human. The concept has roots in preformationism as well as earlier folklore and alchemic traditions. Currently, in scientific fields, a homunculus may refer to any scale model of the human body that, in some way, illustrates physiological, psychological, or other abstract human characteristics or functions, such as compartmentalization of tasks.[2]

References to the homunculus do not appear prior to sixteenth century alchemical writings; however alchemists may have been influenced by earlier folk traditions. The mandragora, known in German as Alreona, Alraun or Alraune is one example.

In Liber de imaginibus, Paracelsus however denies that roots shaped like men grow naturally. He attacks dishonest people who carve roots to look like men and sell them as Alraun. He clarifies that the homunculus’ origins are in sperm, and that it is falsely confused with these ideas from necromancy and natural philosophy.[3]

The homunculus has also been compared to the golem of Jewish folklore. Though the specifics outlining the creation of the golem and homunculus are very different, the concepts both metaphorically relate man to the divine, in his construction of life in his own image.[4]

A tiny person inside a sperm as drawn by N. Hartsoecker in 1695

Preformationism, a philosophical theory of heredity, claimed that either the egg or the sperm (exactly which was a contentious issue) contained complete preformed individuals called "animalcules". Development was therefore a matter of enlarging this into a fully formed being. The term homunculus was later used in the discussion of conception and birth.

Nicolas Hartsoeker "discovered" animalcules in the semen of humans and other animals. This was the beginning of spermists' theory, who held the belief that the sperm was in fact a "little man" that was placed inside a woman for growth into a child. This seemed to them to neatly explain many of the mysteries of conception. It was later pointed out that if the sperm was a homunculus, identical in all but size to an adult, then the homunculus may have sperm of its own. This led to a reductio ad absurdum with a chain of homunculi "Turtles all the way down|all the way down". This was not necessarily considered by spermists a fatal objection however, as it neatly explained how it was that "in Adam" all had sinned: the whole of humanity was already contained in his loins. The spermists' theory also failed to explain why children tend to resemble their mothers as well as their fathers, though some spermists believed that the growing homunculus assimilated maternal characteristics from the womb environment in which they grew.[5] 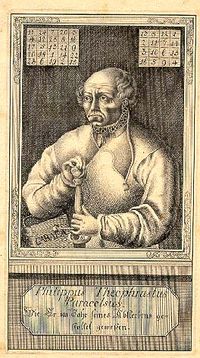 That the sperm of a man be putrefied by itself in a sealed cucurbit for forty days with the highest degree of putrefaction in a horse’s womb, or at least so long that it comes to life and moves itself, and stirs, which is easily observed. After this time, it will look somewhat like a man, but transparent, without a body. If, after this, it be fed wisely with the Arcanum of human blood, and be nourished for up to forty weeks, and be kept in the even heat of the horse’s womb, a living human child grows therefrom, with all its members like another child, which is born of a woman, but much smaller.[6]

Comparisons have been made to several similar concepts in the writings of earlier alchemists. Although the actual word "homunculus" was never used, Carl Jung believed that the concept first appeared in the Visions of Zosimos, written in the third century AD. In the visions, Zosimos encounters a priest who changes into "the opposite of himself, into a mutilated anthroparion".[7] The Greek word "anthroparion" is similar to "homunculus" – a diminutive form of "man". Zosimos subsequently encounters other anthroparion in his dream but there is no mention of the creation of artificial life. In his commentary, Jung equates the homunculus with the Philosopher’s Stone, and the "inner man" in parallel with Christ.[8]

In Islamic alchemy, Takwin (Arabic: تكوين‎) was a goal of certain Muslim alchemists, a notable one being Jābir ibn Hayyān. In the alchemical context, Takwin refers to the artificial creation of life in the laboratory, up to and including human life.

The homunculus continued to appear in alchemical writings after Paracelsus' time. The Chymical Wedding of Christian Rosenkreutz (1616) for example, concludes with the creation of a male and female form identified as Homunculi duo. The allegorical text suggests to the reader that the ultimate goal of alchemy is not chrysopoeia, but it is instead the artificial generation of man. Here, the creation of homunculi symbolically represents spiritual regeneration and Christian soteriology.[9]

In 1775, Count Johann Ferdinand von Kufstein together with Abbé Geloni, an Italian cleric, are reputed to have created ten homunculi with the ability to foresee the future, which von Kufstein kept in glass containers at his Masonic Lodge in Vienna. Dr. Emil Besetzny's masonic handbook, Die Sphinx, devoted an entire chapter to the wahrsagenden Geister (scrying ghosts). These are reputed to have been seen by several people, including local dignitaries.[10][11]

The homunculus is commonly used today in scientific disciplines, such as psychology, as a teaching or memory tool to describe the distorted scale model of a human drawn or sculpted to reflect the relative space human body parts occupy on the somatosensory cortex (sensory homunculus) and the motor cortex (motor homunculus). Both the motor and sensory homonculus usually appear as a small man superimposed over the top of the precentral or postcentral gyrus, for motor and sensory, respectively. The homunculus is oriented with feet medial and shoulders lateral on top of both the precentral and the postcentral gyrus (for both motor and sensory). The man's head is depicted upside down in relation to the rest of the body such that the forehead is closest to the shoulders. The lips, hands, feet and sex organs have more sensory neurons than other parts of the body, so the homunculus has correspondingly large lips, hands, feet, and genitals. The motor homunculus is very similar to the sensory homunculus, but differs in several ways. Specifically, the motor homunculus has a portion for the tongue most lateral while the sensory homunculus has an area for genitalia most medial and an area for visceral organs most lateral.[12][13] Well known in the field of neurology, this is also commonly called "the little man inside the brain." This scientific model is known as the cortical homunculus.

In medical science, the term homunculus is sometimes applied to certain fetus-like ovarian cystic teratomae. These will sometimes contain hair, sebaceous material and in some cases cartilagous or bony structures.[14] 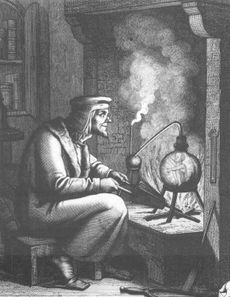 Homunculi can be found in centuries worth of literature. These fictions are primarily centred around imaginative speculations on the quest for artificial life associated with Paracelsian alchemy. One of the very earliest literary references, occurs in Thomas Browne's Religio Medici (1643) in which the author states-

I am not of Paracelsus minde that boldly delivers a receipt to make a man without conjunction,...[15]

The fable of the alchemically created homunculus may have been central in Mary Shelley's novel Frankenstein (1818). Professor Radu Florescu suggests that Johann Conrad Dippel, an alchemist born in Castle Frankenstein might have been the inspiration for the fictional Victor Frankenstein. The German playwright Johann Wolfgang von Goethe's Faust, Part 2 (1832), famously features an alchemically created homunculus. Here, the character of Homunculus embodies the quest of a pure spirit to be born into mortal form, contrasting Faust’s desire to shed his mortal body to become pure spirit. The alchemical idea that the soul is not imprisoned in the body, but instead may find its brightest state as it passes through the material plane is central to the character.[16]

The homunculus legend, Frankenstein and Faust have continued to influence works in the twentieth and twenty-first century. The theme has been used to not only in fantasy literature, but also to illuminate social topics. For instance, the British children's writers Mary Norton and Rumer Godden used homunculus motifs in their work, expressing various post-war anxieties about refugees, persecution of minorities in war, and the adaptation of these minorities to a "big" world.[17] David H. Keller’s short story "A Twentieth-Century Homunculus" (1930) describes the creation of homunculi on an industrial scale by a pair of misogynists. Likewise, Sven Delblanc’s The Homunculus: A Magic Tale (1965) addresses misogyny and the Cold War industrial-military complexes of the Soviet Union and NATO. The homunculus appears in speculative fiction often alongside magic, alchemy, and sorcery, and occupies a central role in the plots of popular series such as Hiromu Arakawa's Fullmetal Alchemist (2001).

Homunculi appear in fantasy based television, film, and games in a manner consistent with literature. Examples can be found in numerous mediums such as the Bride of Frankenstein (1935), fantasy role-playing games (such as Dungeons & Dragons), video games (such as Valkyrie Profile), and manga (such as Fullmetal Alchemist).