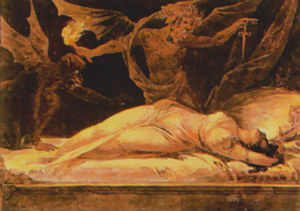 An incubus (from the Latin, incubo, or "nightmare"; plural incubi) is a demon in male form who, according to a number of mythological and legendary traditions, lies upon sleepers, especially women, in order to have sex with them. Its female counterpart is the succubus. An incubus may pursue sexual relations with a woman in order to father a child, as in the legend of Merlin.[1] Religious tradition holds that repeated intercourse with an incubus or succubus may result in the deterioration of health, or even death.[2]

Medieval legend claims that demons both male and female sexually prey on human beings, generally during the night when the victim is sleeping.

A number of secular explanations have been offered for the origin of the incubus legends. They involve the medieval preoccupation with sin, especially sexual sins of women. Victims may have been experiencing waking dreams or sleep paralysis. Also, nocturnal arousal, orgasm or nocturnal emission could be explained by the idea of creatures causing an otherwise guilt-producing and self-conscious behavior.[3] Alternatively, the influence of incubi could also have been invoked to explain otherwise "unexplainable" pregnancies out of wedlock.

Purported victims of incubi could have been the victims of sexual assault by a real person. Rapists may have attributed the rapes of sleeping women to demons in order to escape punishment. A friend or relative may have assaulted the victim in her sleep. The victims and, in some cases the clergy,[4] may have found it easier to explain the attack as supernatural rather than confront the idea that the attack came from someone in a position of trust.

One of the earliest mentions of an incubus comes from Mesopotamia on the Sumerian King List, ca. 2400 BC, where the hero Gilgamesh's father is listed as Lilu.[5] It is said that Lilu disturbs and seduces women in their sleep, while Lilitu, a female demon, appears to men in their erotic dreams.[6] Two other corresponding demons appear as well: Ardat lili, who visits men by night and begets ghostly children from them, and Irdu lili, who is known as a male counterpart to Ardat lili and visits women by night and begets from them. These demons were originally storm demons, but they eventually became regarded as night demons due to mistaken etymology.[7]

Debate about the demons began early in the Christian tradition. St. Augustine touched on the topic in "De Civitate Dei" (The City of God), admitting that there were too many attacks by incubi to deny them. He stated, "There is, too, a very general rumor, which many have verified by their own experience, or which trustworthy persons who have heard the experience of others corroborate, that sylvans and fauns, who are commonly called incubi, had often made wicked assaults upon women."[8] However, despite this affirmation, questions continued about the reproductive capabilities of the demons. 800 years later Thomas Aquinas would lend himself to the ongoing discussion, stating, "Still if some are occasionally begotten from demons, it is not from the seed of such demons, nor from their assumed bodies, but from the seed of men taken for the purpose; as when the demon assumes first the form of a woman, and afterwards of a man; just as they take the seed of other things for other generating purposes."[9] Thus it became generally accepted that incubi and succubi were the same demon, but able to switch between male and female forms.[10] A succubus would be able to sleep with a man and collect his sperm, and then transform into an incubus and use that seed on women. Their offspring were thought to be supernatural in many cases, even if the sperm and egg originally came from humans.[3]

Though many tales claim that the incubus is bisexual,[11] others indicate that it is strictly heterosexual and finds attacking a male victim either unpleasant or detrimental.[12] There are also numerous stories involving the attempted exorcism of incubi or succubi who have taken refuge in, respectively, the bodies of men or women.

Incubi are sometimes said to be able to conceive children. The half-human offspring of such a union is sometimes referred to as a cambion. The most famous legend of such a case includes that of Merlin, the famous wizard from Arthurian legend.[4]

According to the Malleus Maleficarum, exorcism is one of the five ways to overcome the attacks of incubi, the others being Sacramental Confession, the Sign of the Cross (or recital of the Angelic Salutation), moving the afflicted to another location, and by excommunication of the attacking entity, "which is perhaps the same as exorcism."[13] On the other hand, the Franciscan friar Ludovico Maria Sinistrari stated that incubi "do not obey exorcists, have no dread of exorcisms, show no reverence for holy things, at the approach of which they are not in the least overawed."[4]

There are a number of variations on the incubus theme around the world. The alp of Teutonic or German folklore is one of the better known. In Zanzibar, Popo Bawa primarily attacks men and generally behind closed doors.[14] "The Trauco," according to the traditional mythology of the Chiloé Province of Chile, is a hideous deformed dwarf who lulls nubile young women and seduces them. The Trauco is said to be responsible for unwanted pregnancies, especially in unmarried women. Perhaps another variation of this conception is the "Tintín" in Ecuador, a dwarf who is fond of abundant haired women and seduces them at night by playing the guitar outside their windows; a myth that researchers believe was created during the Colonial period of time to explain pregnancies in women who never left their houses without a chaperone, very likely covering incest or sexual abuse by one of the family's friends.[15] In Hungary, a lidérc can be a Satanic lover that flies at night and appears as a fiery light (an ignis fatuus or will o' the wisp) or, in its more benign form as a featherless chicken.[16]

In Brazil and the rainforests of the Amazon Basin, the Boto is a combination of siren and incubus, a very charming and beautiful man who seduces young women and takes them into the river.[17] It is said to be responsible for disappearances and unwanted pregnancies,[18] and it can never be seen by daylight, because it metamorphoses into that kind of river dolphin during those hours. According to legend the boto always wears a hat to disguise the breathing hole at the top of its head.[19]

The Southern African incubus demon is the Tokolosh. Chaste women place their beds upon bricks to deter the rather short fellows from attaining their sleeping forms. They also share the hole in the head detail and water dwelling habits of the Boto.

In Germanic Folklore there is the mara or mare, a spiriT or goblin that rides on the chests of humans while they sleep, giving them bad dreams (or "nightmares").[20] Belief in the mare goes back to the Norse Ynglinga saga from the 13th century,[21] but the belief is probably even older. The mare was likely inspired by sleep paralysis.

In Assam, a north-eastern province of India it is mostly known as "pori": পৰী meaning angel). According to the mythology Pori comes to a man at night in his dreams and attracts towards her. Gradually the victim's health deteriorates and in some cases a tendency to commit suicide generates in him.

In Turkish culture, incubus is known as Karabasan. It is an evil being that descends upon some sleepers at night. These beings are thought to be spirits or jinns. It can be seen or heard in the nightmare and a heavy weight is felt on the chest. Yet people cannot wake up from that state. Some of the causes are sleeping without adequately covering the body (especially women) and eating in bed.

Victims may have been experiencing waking dreams or sleep paralysis. Nocturnal arousal or nocturnal emission could be explained away by creatures causing otherwise guilt-producing behavior.[3] Then again, victims of incubi could well have been the victims of real sexual assault. Rapists may have attributed the rapes of sleeping women to demons in order to escape punishment. A friend or relative is at the top of the list in such cases and would be kept secret by the intervention of 'spirits.' The victims and, in some cases, the magistrates,[4] may have found it easier to explain the attack as supernatural rather than confront the idea that the attack came from someone in a position of trust.