In the Company of Witches 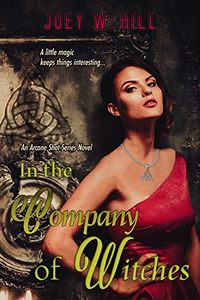 In the Company of Witches Reissue Book Cover, written by Joey W. Hill

In the Company of Witches is a novel by Joey W. Hill. It is the second work in the Arcane Shot series by this author. In this work, the character Raina is part Succubus and another character is described as being an Incubus.

All witch and part succubus, savvy businesswoman Raina has converted a Southern plantation house into an extremely profitable old-fashioned bordello. Because of her abilities as a witch, the demons under Raina’s protection can feed off the sexual energy of their clients without killing them—definitely a good thing for repeat business.

But when a rogue incubus shows up on Raina’s doorstep begging for asylum, the witch’s well-run business is put in jeopardy. The incubus has stolen an object of great power from Lucifer, and Underworld Dark Guardian Mikhael will do anything to get it back—even if it means incinerating the incubus on Raina’s porch to get the answers he seeks.

Not to be trifled with, Raina enters a dangerous match of wits with Mikhael to achieve their mutual goals—only to discover that the reluctant attraction between them is the most hazardous game of all…

At the time of this article's entry in the SuccuWiki there was no review available. Tera has this work on her reading list and will review it as soon as possible.