Pibgorn is a webcomic by Brooke McEldowney that began on March 11, 2002, ended its run on Comics.com on April 18, 2007 and resumed with GoComics.com on May 14, 2007. The title character is a fairy whose adventures span the fantasy and real worlds and in this series, the character Drusilla is a Succubus. Mr. McEldowney also created the syndicated comic strip 9 Chickweed Lane. 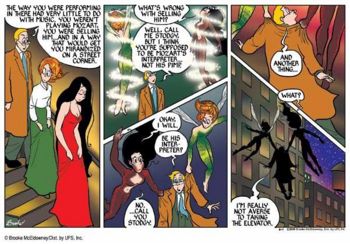 Geoff, Pibgorn, and Drusilla exit a nightclub in the beginning of the story, "Mozart and The Demon Lover"

The strip concept first appeared to the public in newspapers and online in a 3-week run as the Newspaper Enterprise Association's Christmas offering for 2001, under the title A Fairy Merry Christmas. It thereafter became a full webcomic rather than a printed one.

Until April 18, 2007, Pibgorn was published on the internet by United Feature Syndicate (an unusual move by the syndicate) on their Comics.com website. It has also been published in a graphic novel, Pibgorn: The Girl in the Coffee Cup, which was released in October 2006. Possibly because of graphic novel considerations, Pibgorn is characterized by involved story arcs which may seem better suited to a graphic novel than a daily comic, and it is also notable for its creative use of color and large format, together with strong themes of violence (explicit) and sexuality (generally implicit), attributes not usually associated with daily print comics. The artist has made the point that he wants to create a story without worrying about the editors of family newspapers, and he is making the most of that freedom.

Pibgorn originally ran daily Monday through Saturday, but on February 8, 2006, it was announced that beginning on February 13, the strip would run only on Monday, Wednesday, and Friday. McEldowney stated the burden of writing two daily strips concurrently as the reason for the cutback. As of July 14, 2008, the strip began running 5 days a week, Monday through Friday; McEldowney indicated in his blog that despite time constraints, he wanted the story to move along at a brisker pace.

Pibgorn slowly evolved over the years after 9 Chickweed Lane was begun by McEldowney, who would render Edda as a prototype Pibgorn on rare occasions. He finally started adapting the idea into a proposed spin-off entitled The Titans, which was rejected by syndicate editors, in 2000. These proposed strips and accompanying sketches were presented on the Pibgorn website in 2005 during one of McEldowney's hiatuses from the strip.

Titans would have been a gag-a-day format strip, in which Pibgorn (named Oola Inch here), disenchanted with her expected role as a fairy, usually would break away from her regular routine to wax philosophical. Unfortunately, Oola was also one of life's losers, her dialogues often resulting in misfortune, such as having a magic 8-ball roll over her, or nearly be eaten by whatever animal she's conversing with (a spider, a duckling, etc). The strips also showed a darker side to her character, as in addition to managing dewdrops, her responsibilities include serving as the "voices-in-my-head" of disgruntled government employees, driving one to attempted homicide on at least one occasion.

The final set of proposal strips showed Oola running afoul of Prince Crewth and Gaggot, here named Prince Grabstein and Rhune, when she petitions to leave "dewdrop brigade" and become a stand-up comedian. Unable to tell if she's laughing with him or at him, Grabstein outlaws laughter altogether and sets Luciano after Oola, only for the fly to fall in love with her. These situations were later recycled as part of the early Pibgorn story arcs.

Pibgorn has completed 13 distinct adventures to date, and has begun another. The story arcs are as follows, named as McEldowney conceived them:[1]

From a letter from Brooke McEldowney to his readers:

With United Media’s announcement that “Pibgorn” is to be discontinued, I have been inundated with e-mail, much of it agitated and distressed. I’m very sorry you had to get the news in this rather dispassionate way. That I may answer your central question forthwith, I’ve composed this response for everyone – so please forgive me if I seem impersonal.

“PIBGORN” WILL CONTINUE. (for current information and dispatches go to officialpibgorn.livejournal.com)

There. That is the main thing I wanted to say. Comics.com, however, will, as they have announced, no longer be the source. Nothing dramatic happened, really. I simply came to feel that the editorial needs of comics.com and those of “Pibgorn” were becoming more and more divergent and incompatible. For this reason I asked to be released from my contract with United Media in order to secure a new online home for “Pibgorn.” United Media most graciously, and reluctantly, agreed. In short order I hope to get Pib back up and flying.

Meanwhile, you have seen the most current installments of '"Pibgorn". Hold that thought. We’ll be back.

All best wishes, and thanks so very much for writing.

Although McEldowney doesn't explicitly say it, the examples he gives in his blog (below) suggest that he wanted to be able to use more suggestive language and racier images than United Media would permit, and considered their standards too restrictive. After the move to GoComics.com, the content became more risque, including nudity and implied sexual content. For example, in the August 22nd, 2008 strip, Geoff is seen walking down the street, nude, with his bare buttocks on display[3], something that Brooke's contract with comics.com would not allow. Similarly, several other August strips have hinted at rape [4] and sex. [5].

Pibgorn returned to the Web on May 14, 2007, at gocomics.com, owned by Universal Press Syndicate. Continuing in its three-per-week format, the interrupted story arc was presented from the start so as not to confuse new readers.