Macho Women with Guns (MWWG) is a comedy role-playing game created by Greg Porter and published by Blacksburg Tactical Research Center (BTRC). (A D20 System version of the game is also available from Mongoose Publishing.) Nominally a science-fiction game, it parodies both action films and other role-playing games. An expansion module for this game called Bat-winged Bimbos from Hell contains appearances of Succubi and similar being. It also provides stats for player characters which bring the possibility of a player character being played as a Succubus.

The world of Macho Women with Guns is a post apocalyptic Earth which had gone through a series of disasters, collectively referred to as the 'Dang'. The result the brief nuclear war, a virus targeted males, and massive earthquakes that open the San Andreas Fault enough to both make much of California an island, and open a portal there directly to Hell itself, has created a female dominated world where survival comes first.

One result of much of this is that with the fall of much of civilization, and with direct evidence of the existence of Hell, church attendance and faith have skyrocketed. As this has resulted in a reduction in the number of souls going to Hell, The Prince of Darkness has decided that it is best to bring back civilization, complete with all the vice and evil it breeds. As such, his forces have taken over Los Angeles, renaming it Los Diablos, to act as the center of operations. Naturally, the people of LA/LD have barely noticed.

Macho Women with Guns is set in a near-future America where society has collapsed due to the misdeeds of the Reagan Administration. Taking advantage of the earthly chaos, Satan has dispatched his female minions, the Batwinged Bimbos From Hell, to rebuild society in a form he approves of. The Vatican has responded to Satan's plans by dispatching its elite group of warrior nuns, The Sisters of Our Lady of Harley-Davidson to combat the bimbos. The two groups of women compete (sometimes violently) to rebuild civilization by vanquishing post-apocalyptic menaces and male chauvinism.

Dimensional warps caused by the conflict have opened connections to a series of parallel universes, each of which represents a different genre environment, such as fantasy or science fiction. These universes, along with Earth, constitute a campaign setting that Macho Women with Guns calls The Machoverse.

Player characters in Macho Women with Guns are statuesque females with a penchant for revealing clothing, who engage in combat with otherworldly menaces (like the Puppies of Tindalos), satirical representations of male chauvinism, such as Drunken Frat Boys, and occasionally each other. (Non-female opponents in the game are usually referred to as critters.) 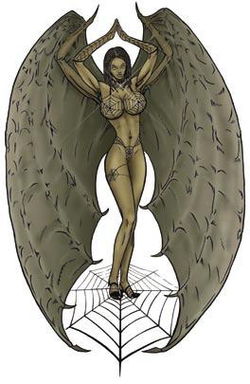 Bat-winged Bimbos are unemployed Succubi who have nothing to do in the hierarchy of Hell any longer. The Prince of Darkness, fed up with Succubi cluttering up the place like a bunch of delinquent teenagers due to the dearth of men in the world, sent them forth to restore order in the world. Hell, for the first time in its history, is struggling to fill places as the population of Earth is so busy scraping a living from the devastated world that it has no time for the serious business of sinning. Emerging from the demonic rift near Los Diablos, the Bat-winged Bimbos were just as likely to fall into the same trap as many other hopefuls reaching that city. Many ended up with menial, low wage jobs or appear in pornography while they wait for their ‘big break’.

Bat-winged Bimbos are not required to be 'evil' or to work directly for Satan. It is just as likely to see a character working alongside some of the Renegade Nuns of Pope Joan I as it is to see them actively promoting 'civilization'.

The Infernal Mistress is an advanced (Prestige) class available. While it is not required that Bat-winged Bimbos take this path (or that a character has to be one to become an Infernal Mistress), it is often a natural progression.

The Infernal Mistresses are minions of Satan that on the verge of getting back on his 'good' side and maybe getting that nice apartment overlooking the Lake of Fire, and off this 'pathetic mudball of a world'. Of course, most overlook the fact that if they reach such a level of success, they are likely to find themselves getting sent on missions right back to Earth on a regular basis.